The major types of hail netting for your garden

Row cover comes in grades (weights) and several sizes, and each has its time of use during the planting season. Row cover is important, however, today our focus will be on the types of hail netting or row cover to give you a clearer picture of their various types.

Insect barriers: The insect barriers are at the daintiest end of the spectrum. These are essentially flimsy, almost a translucent fabrics that allow as much as 95 percent of light to penetrate through them. Against frost, they don’t render much protection, however, can be left over the crops for weeks to alter insect infiltrations. If it is a different type of insect pests such as cucumber beetle, carrot rust fly, and cabbage worm, they do work perfectly. 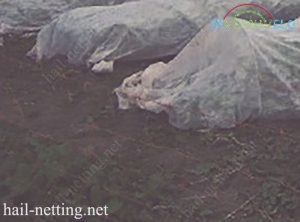 Hail netting protects crops from bugs but is not very effective during cold seasons.

Lightweight covers: Another setup apart from the insect barriers is lightweight covers. They are more substantial and weigh about half an ounce per square yard. Why use them? They are perfect in protecting new seeds from squirrels and birds, or plants from rabbits, birds, deer, and insects. They lock in moisture and heat by boosting their seed germination. Most hail netting covers can render up to 2 degrees Celsius of frost protection and allows about 85 percent of light to penetrate to the young plants.

Medium-weight covers (MWC): These cover normally weigh from 0.9 to 1.25 ounces per square yard. They are used typically as a winfter cover or light frost protection. MWC offers up to 3 to 4 degree Celsius of protection, depending on the particular product. This will hold more heat when compared with the lighter weight fabrics. Unlike the lightweight covers, they allow about 70 percent of light penetration or transmission. Because of this, the MWC should not be used as a barrier for insect during the growing season. There won’t be adequate light to give the maximum plant growth needed during the summer and spring months. 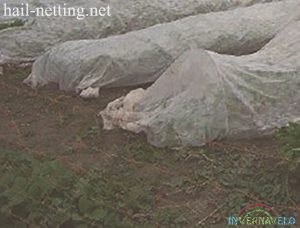 In addition to protecting crops from bugs, it can also protect the seeds of small animals such as rabbits and squirrels and birds.

Heavyweight row cover (HRC): These heavier cover are used in the protecting of crops against heavy freezing. Unlike the MWC, they weigh 1.5 to 2 ounces per square yard. HRC offers about -4 degree Celsius. They give off about 30 to 50 percent light penetration or transmission. Heavyweight row cover is your best option for vegetable support or as temporary frost blankets. The disadvantage used during summer is that they block the required light needed for the plant to grow healthy, as well as raising the ambient temperature beside the crops. During winter, the growth of most of the crops slows down dramatically. This happens when they have less than 10 hours of daylight. In as much as they hinder much sunlight from gaining access to the crops. During winter, growth is not the primary goal but protection.

Hail net or row covers are directly laid on the soil surface or on the top of the growing plants. This is because they can float, due to their lightness and are thereby called floating row covers. For some plants, they do not need covering but supported on simple hoops. In such case, the supported row covers are the best option. If floating row covers are used directly on the top of some plants, this may cause the foliage to suffer cold, hence the use of supported row covers. The weight of the fabric is a key factor in determining what one should use – one with hoops or floating row cover. The row covers and lightweight insect barriers are flimsy enough so that they won’t crush the growing plants. In this case, a hoop will be more beneficial when compared to the medium and heavy grade material. 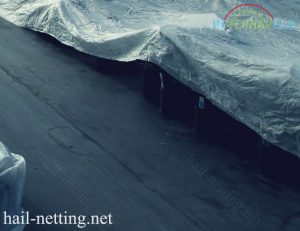 The disadvantage of the hail network is that it is not very effective during heats and extreme cold.